The cultivation of Lophophora (Peyote).

This description will tell you how to grow peyote. You should be aware that peyote is one of the slowest growing cacti. Don't let this put you down, I have found a way  to speed them up a bit.
In nature they will start flowering after about 10 years, in culture about 5 years and in my way 3 years, some even in the second year.
The best time to start with seeds is in the early spring.
Get cactus earth from your local flower shop or nursery, try to work a bit clean, although the whole thing is not very sensitive. Put the earth in clean, preferably plastic pots. Make the earth really soaking wet. leave the pots for one day to let the excess of water drip out.
Now you can put the seeds in. They should be put just under the surface, it is not really necessary  that they are covered with earth. Cover the pot with a piece of transparent  plastic, which can be fixed under the edge with elastic or tape. It seems strange to grow cacti in such an extremely humid atmosphere, but it is o.k.. Put the pots in a sunny place, like behind a window on the south, it is nice if there is a radiator under the window, or if you want to do it more professional, you can use something that keeps the earth temperature around 22C (something like  an electric blanket) Keep the pots covered with the plastic, there is no need to give water for weeks. Within two weeks tiny green balls will appear, the baby peyote's. After 3/4 weeks from the start, you can start making very small holes in the plastic,  after a few days make some more and later make them bigger. In this way get adapted to the dryer conditions  in this hard, hard world.
Once there are so many holes, that the humidity is the same as in the surrounding you can take away the plastic (this will be about 8-10 weeks after starting). As long a the cacti are so small, they are quit vulnerable, be careful. Once the top layer of the earth gets dry, you can start watering, but never let them have "wet feet".
The first two years, warm earth is good, as long as they grow (Which depends on the climate in which you live).  In about the middle of the autumn stop giving water. To get them well through the winter you have to keep them dry, most trouble, i.e. rot is caused by to much water, remember it is a desert plant, it can stay alive , for a unbelievable long time without water, don't worry. In winter, you can let the temperature  drop to 4 to 5C.
When the sun gets stronger in spring they can have water again. You might have to even soak the pots for a while, if the first water just runs through the earth, without holding it. These plants like it hot. I keep them in a greenhouse and never open the  windows, sometimes temperature rises  to even 50 C, I used  to keep them in the summer outdoors, in a upside down aquarium, which worked well . When it is so hot do give enough water, keep them wet. be careful with fertilizers, if you give them fresh earth every two/three years, if you want to use fertilizer, use cacti fertilizer from a local shop, use half of the prescribed amount, if the  the plant gets to much, it will burst, that won't kill it, but it will take one or two years to overgrow the damage.
After the first year, it is better to put them in separate pots (if anything happens you can treat them individually). A small pot (5 cm) will do fine, it is best to do this in spring, before you start giving water. Press the earth well around the cacti. Keep the earth a bit below the edge of the pot, to make giving water easier. The green part of the plant should be above the surface, to prevent rot. Bigger plants should also be kept in not to big pots, so that they don't stay wet for too long a period.
Another way to grow peyote is by cutting  buttons from a plant. Bigger plants start growing more and more buttons and there is also a kind or a variety, which grows  many buttons. Cut off the button with a real sharp knife and leave the button to form a callus on the wound, this might take a week or two. Then put the button on top of the earth, and it will start growing roots easily (here also warm feet will  speed up the process).
Peyote can be crafted on different other cacti, Trichocereus will do fine. Crafting will speedup growth. Best is to use young, growing buttons and craft them on a also young, growing cacti. Use a  sharp, sterilized knife. The knife can be sterilized with the flame of a lighter. In the cutting of both cacti, you will see a ring, it would be perfect if the rings are the same size, which usually is not the case. The plant transports food and water through this ring, so the rings have to touch each other, so that the top can get what it needs. To make sure, that there will be a connection the top is placed out of center with the base, then there will always be two connection points (see here) . When the top is placed, it needs a little pressure, this can be done with elastic or plastic foil, which can be connected on the needles of the base cacti. This can be removed after week.
I wish you success, for questions or suggestions, please email me .

One note regarding the 'law', Peyote is illegal in the US, although it was there long before the recent 'civilization'.
There is an exception for the Native American Church , although they have been harassed also recently.
A sad story after all, read about it in this press release of January 11/1999.

In canada: Drug laws in Canada fall under the Controlled Drugs and Substances Act-
this was recently instated in 1996 replacing the Narcotics Control Act.
One of the major differences between these acts relates to peyote.
In the Controlled Drugs and Substances Act (the new one) Mescaline is
listed as a schedule IV drug. This is exactly how it is written out in
the act:
17. Mescaline (3,4,5-trimethoxybenzeneethanamine) and any salt thereof,
but not peyote (Lophophora)
Peyote is exempted from the act-- it is legal in Canada!! regardless of
recreational, religious or whatever use you want. There are no
conditions on possessing or cultivating it.


The cultivation of San Pedro.
links
Pictures
peyote in their homeland
peyote in Mexico
Peyote in Texas
oldest find (7000 years) 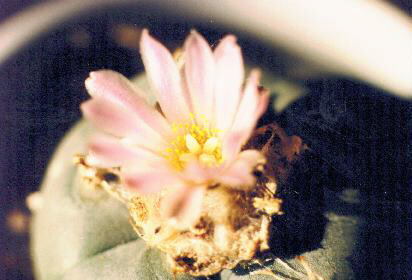